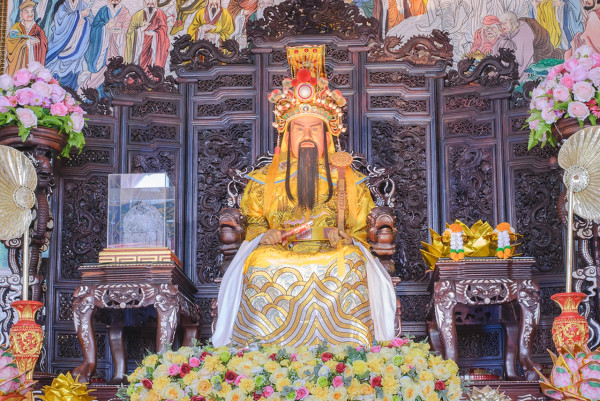 Connecting with The Jade Emperor: Hidden Practices Webinar (AUDIO ONLY)

The Jade Emperor is one of the most powerful beings in the universe. He is the director and chairman of the Celestial Treasury and it is said that all forms of wealth pass through his hands.  He is very benevolent and kind. His power is available for us to use but we must avail ourselves to the correct spells.

He governs the cosmos and resides in a magnificent palace in the highest part of heaven along with his large family and entourage of ministers and officials. The Jade Emperor is the supreme ruler of Heavens, the hades and the protector of mankind according to Chinese folklore religion and the highest-ranking deity of the Taoist pantheon.
Based on one account the Jade Emperor was originally the crown prince of the kingdom of Majestic Heavenly Lights and Ornaments. At birth he emitted a bright light that filled the entire kingdom. When he was young, he was benevolent, intelligent and wise. He devoted his entire childhood to helping the needy (the poor and suffering, the deserted and single, the hungry and disabled).
Furthermore, he showed respect and benevolence to both men and creatures. After his father died, he ascended the throne. He made sure that everyone in his kingdom found peace and contentment, after that he told his ministers that he wished to cultivate Dao in a mountain cave. After 1,750 trials, each trial lasting for 120,976 years, he attained Immortality. After another hundred million years of cultivation, he finally became the Jade Emperor.
In this webinar, we will be discussing the hidden practices with connecting to the Jade Emperor. These practices have not been shared before and are a few of the ways that Dr. Gibson connects with the Jade Emperor.
Price: $99.95

Learning to Look Into The Future Webinar (AUDIO ONLY DOWNLOAD)

The Lord Odin Body of Wealth Webinar (AUDIO ONLY DOWNLOAD)