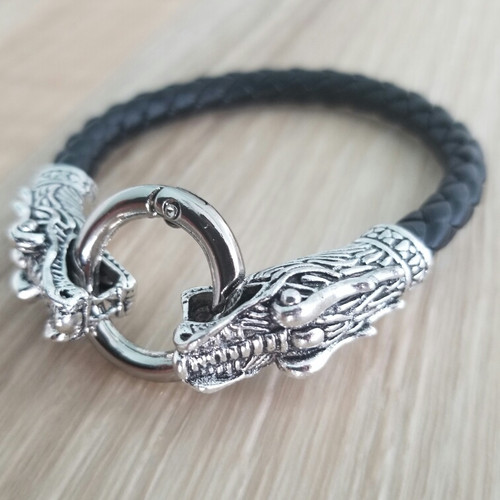 The Dragon Feldrakan lived in the country of Putrashan, near what is now modern Iraq. He lived for more than 15,000 years and was renowned for his ability to create objects of power with a single thought. Mages from all over the world came to him and gave him huge sums of gold for a single ring or amulet. Feldrakan loved gold and he often exacted such large sums of gold for his objects that only the wealthiest nobles and wizards even dared approach him. Feldrakan often traded stories with the wizards that visited him and over the centuries, he learned the secret of bodily transformation. He transformed himself into light and abandoned his spiritual treasures after burying them in a mountain. A number of wizards have searched for his hoard and a few have found items Feldrakan left behind to tease the curious.

This Bracelet has three of Feldrakan’s strongest attributes empowered into it. Feldrakan’s energies are amongst the most powerful when dealing with protection from evil, increased life span, and greatly enhanced healing powers. These will come just by putting the bracelet on. In order to connect directly to Feldrakan’s power, meditate with the bracelet while focusing on Feldrakan.

The Feldrakan bracelet has also been uniquely empowered by the masters to amplify the energy already within it.

Adult Unisex, One Size Fits All