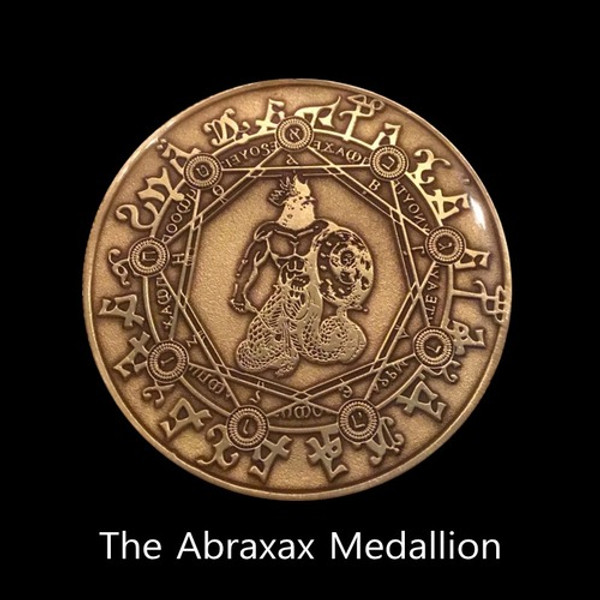 More about The God Abraxax

Throughout the various beliefs associated with Abraxas, he was often described as having the head of a lion or in some cases a cock, which at times bore a royal crown, along with a dragon's tail, and serpents in lieu of legs. There are many interpretations attached to the word “Abrasax”.

According to the “Basilidians”, he was the Supreme God, for the Greek letters that forms his name adds up to the number of 365, which according to their beliefs in turn corresponds to the number of days in a year. Each day of the year according to the Gnostics, represents a “circle of creation” which in turn has its own individual spirit assigned to it. Basilides was a Gnostic Christian teacher from the second century CE who taught in Alexandria Egypt.

It is thought that when Carl Jung wrote his “Septem Sermones ad Mortuos (The Seven Sermons to the Dead) , he was in effect, paraphrasing Basilides. His treatise is in effect a three-stage development of God as understood through the eyes of humans. Very basically these three stages begin with god as a single entity who then transforms into a separation of god and devil, which then becomes a unified entity of both god and devil. The Basilidians also believe that it was Abrasax who sent Jesus Christ to do his bidding here on earth.

It is established knowledge that the word Abraxas (Abrasax or Abracax) was often found engraved on certain gemstones, which were called Abraxas stones. These in turn were used as amulets or charms. Such stones contained the name “Abraxas” and/or other mystic figures and/or groups of letters.

The initial spelling of the word as seen on the stones was "Abrasax". According to Gnostic cosmology, the seven letters spelling its name represent each of the seven planets, which within the Gnostic belief system are the Sun, Moon, Mercury, Venus, Mars, Jupiter, and Saturn. The word Abraxas is thought by some to be the origin of the word “abracadabra”, though this word also has other sources cited as being its origin.

The Solar Talisman of God