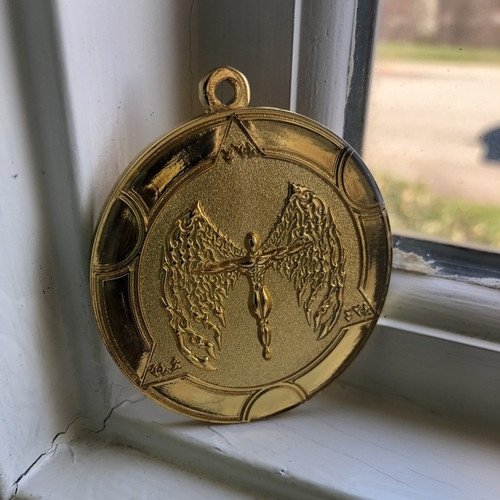 A few weeks ago, we crossed a major threshold. We estimate that over 300 life changing miracles have occurred as a result of the energy of darshan that we have been granted through our prayers and works.  A woman wrote us who had been diagnosed with breast cancer. She began playing The Miracle Prayer day and night prior to her staging process.  When she went in for staging, the tests came back with a score of ZERO.  The doctors had never seen that before.  They call it a miracle.  We have a pretty good idea of what happened.

The medallions are linked to the angelic essence that Kathy and I carry into the world.  Kathy’s essence is tied to the Archangel Zagzagel.  Zagzagel is the angel associated with Moses and the burning bush.  She carried the power of the Creator into the world and manifested the light of the burning bush.  She is the Angel of Wisdom, Healing, and Balance.  Kathy is an Incarnation of Zagzagel in this world.  The Female Primordial Healing Medallion has been designed to carry the healing power of Zagzagel into the female body. When a woman places this medallion on her chest, she only need wear it.  The medallion automatically radiates the power of the Creator into the aura and spreads the miraculous energy associated with The Archangel Zagzagel.

My essence is tied to the Elohim Angel group.  El, my Elohim name, carries my healing essence into the world.  El carries the energy of healing, wisdom, and angelic power.  This grouping of angels was present in creation before the world was created and is responsible for the perpetuation of the human species. The Male Primordial Medallion carries the energy of the Elohim into the male human body and effects change automatically.

Each of these medallions was created to carry great healing energy and power.  They are the first Primordial Class Healing Medallions that we have created.

This product hasn't received any reviews yet. Be the first to review this product!