The Origin of the Jade Emperor: The Journey of Luhan 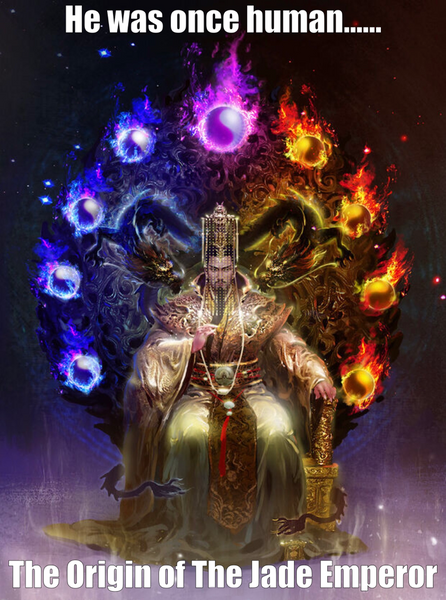 The Origin of the Jade Emperor: The Journey of Luhan

The Origin of the Jade Emperor: The Journey of Luhan
The Jade Emperor received the office of Ruler of Heaven at a relatively young age. Gods live for billions of years.  He rose to the office after a relatively brief human life.  After he assumed the mantle of Jade Emperor, he noticed that he was able to control vast streams of celestial power that emanated from the universe. These currents, which he called Li, were the basic energy patterns that composed the blueprint of the universe itself.  He learned that if he concentrated hard enough, he could create anything he chose.
At first, he created great rivers of gold and diamond in order to subsidize the creation of all the palaces and homes that he needed for his family.  He then learned to create the palaces and homes with the energy of the Li.  Over time, he learned to create planets, stars, galaxies, and eventually entire domains of reality with thought alone.  Legions of angels and demons sought his power and his creations were attacked on several occasions. He created standing armies of demigod giants who stood guard over his creations.  He also created vast force-fields of energy to protect his palaces that have never been breached to this day.
This is the story of how the Jade Emperor came to power, It follows His Eminence through a series of magical struggles that lead him to mystery, danger, discovery, and love.
This story also includes 12 all new Jade Emperor Spells.
This text is available until November 30, 2020 at 11:59 PM EST.
Price: $399.95