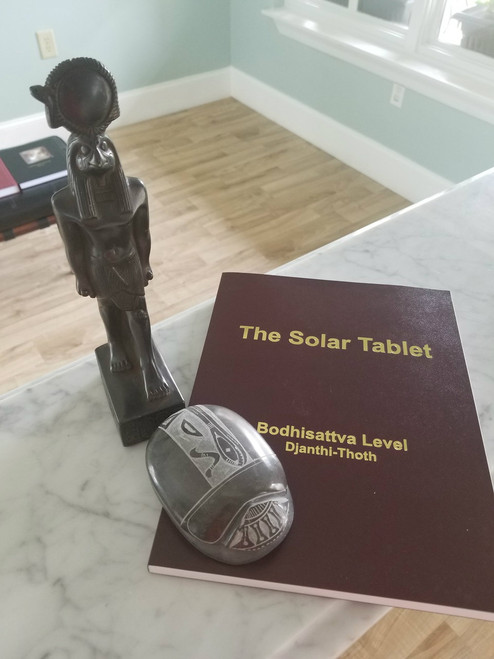 This is truly a rare and one of a kind package. We only have one available in stock! This package has been specifically put together to help one connect with the sun and advance one’s solar practices. This items included are empowered to greatly expand one’s consciousness and remove obstacles stifling growth. Included in this package is:

The first set of solar tablets allow for the expansion of awareness of the solar form. The physical body, the ego, and the mindall fight the higher realities that surround us. The first tablets also empower solar consciousness. This consciousness allows us to become aware of the solar body and to interact with the other beings whose consciousness resonates with the energyof solar power. the dormant DNA of the body uses the energy of the tablet automatically. You may look at each tablet for onlya few seconds and your higher mind will do the rest.

This is a book that reads you

This book is not to be read as you would a book of words. Each tablet holds a key. This key connects the energy of higher consciousness, the soul, and the lower mind. Through this connection, the entire consciousness of the user will grow byleaps and bounds. Do not try to interpret the symbols that you see. They are also energy signatures. Allow the mind toabsorb the energy. Your only task as the user is to open yourself to the power.

Horus is known by many as the Sky God, associated with guardianship and protection of primarily the sun. The included statue of the God Horus was found and empowered at the base of the Great Pyramids of Egypt. Placing it on one’s altar will help you to establish a relationship with Horus providing you greater ability to connect with the sun when practicing one’s solar work.

Scarabs are known to bring very powerful currents of luck. Throughout the Egyptian period many great magicians would use these to bring the dead back to life. The secret to this magical practice is the Energy of the Scarab and the Healing spell etched into the bottom. The two together have the power of a creation cell when used correctly.

This scarab was found at the base of The Great Pyramids. On the bottom of the scarabs are very powerful spells. These spells are used to unlock one’s abilities, specifically in regards to improving one's communicating with the sun.

This product hasn't received any reviews yet. Be the first to review this product!