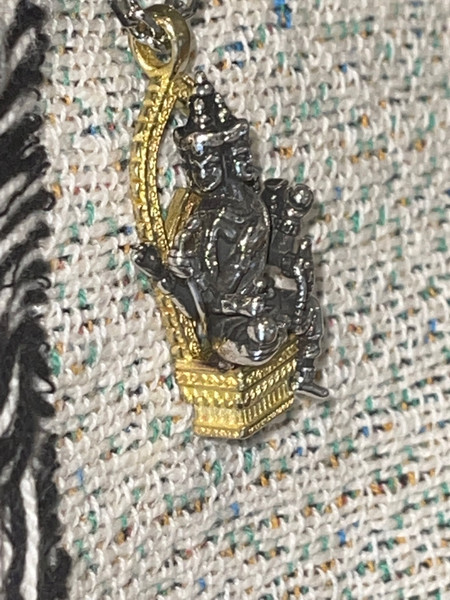 NOTE: NO DISCOUNT CODES OR REWARDS POINTS ARE AVAILABLE FOR USE FOR THIS RING. ANY POINTS USED WILL NOT BE REDEEMED BACK TO YOU AND THE RING WILL NOT BE SENT. YOU WILL BE IMMEDIATELY REFUNDED.

Brahma is known to be the first God in what some Hindu see as the Great Trinity. The other two gods are Shiva and Vishnu. Brahma is known for his influence on creation, specifically creating the world and every living thing on it. Brahma is greatly revered and worshipped all around the world. The four headed statues you see of Brahma are the representation of the four Vedas, which mean “To Know”. These 4 Vedas are ancient script that date back to early 1600 BCE.

The Erawan Brahma Necklace is charged and empowered with the energy of this God. Lord Brahma is the Creator Deity in the Hindu Pantheon. Wearing this necklace will help you to have a direct line to the gods of all things created on earth. This connection will allow you to be more creative and in tune with your God self.

We have a limited number of necklaces available. The chain is included.

Spiritual Attunement and Imprinting to The Goddesses of Light