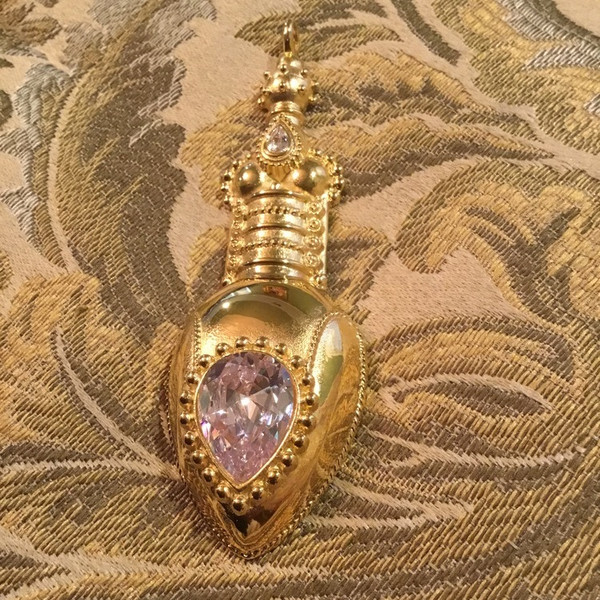 The Vatican Library was founded in 1451 by Nicholas V. It holds some 180,000manuscripts, 1.6 million books and 150,000 images and engravings (as of 2014). The secret archives traverse some 50 Plus miles of land underground and special credentials are required for entrance.

The idea that there is a secret library stems from a mistranslation of Latin. The actual name of the Vatican archives is Archivum Secretum Apostolicum Vaticanum . ‘Secretum’ in Latin does not mean ‘secret,’ it’s more accurately translated to mean ‘personal’ or ‘private’.

There are priests who are specially trained in the art of securing and accessing the information within the archives. There is a legend that tells of the existence of an amulet that allows the user to magically access the information within a book without reading it. The device is called The Paragnosis Amulet and it is the secret magical tool used by the priests of the archives in order to navigate the mountains of information they work with daily.

The Paragnosis Amulet allows the user to gather information directly from a book without picking it up or even opening it. Over 20 years ago, I met with an Adept of the Order Tariqa Caznazaniyya who wore another similar any let. I chose several books from my stacks, chose pages from the books at random, and asked him to tell me what was on the page. I made sure that he could not see the pages. He not only told me what was on the pages, but he described pictures, connecting texts, and bibliographic references that I had to check and confirm. He laughed at me and said I have much too learn and that one day I would get there. I asked him to show me how it worked and his reply was riveting. He said;

‘The amulet studies your thoughts, learns how you think, and offers you a better way to learn. But you have to let it work on your lazy mind else nothing will change.’

I never forgot his words.

The mind does not exist solely within the brain. Your mind is part of a gigantic universal holographic computer that contains all the information, thoughts, emotions, ideas, and dreams that will ever exist. The process of gnosis allows you to tap directly into this base of information during the process of enlightenment.

Paragnosis allows you to use a magical tool such as an amulet to help you achieve the same goal prior to enlightenment. The amulet does not work automatically. One must use the word of power provided with the Paragnosis amulet in order to access its power. Your mind will naturally resist this function, but with practice and persistence, you can break through and perform miracles of knowledge.

Amulet of Angelic Power and Blessing

The Lord Ganesha Amulet of Luck and Good Fortune

Amulet of Angelic Power and Blessing