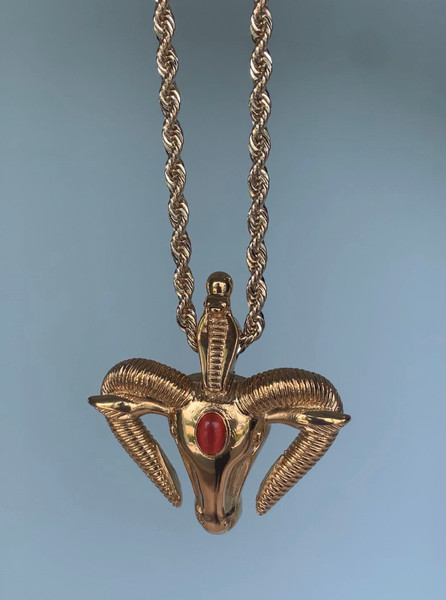 The Solar Talisman of Amun Ra
Amun is often referred as King of the Gods and was among the most powerful Gods in ancient Egypt. Throughout the history of Egypt he has been an important figure and when combined with Ra, the Sun god, he became even more powerful and was referred to as Amun-Ra. Amun is often known by names like the god of the sun, air, and the sky. He is the member of the Ogdoad of Hermopolis and was one of the eight gods who formed the same, followed by the Theban Triad. The symbol used for representing the god is the ram.
His name means "the hidden one," "invisible," "mysterious of form," and unlike most other Egyptian gods, he was considered Lord of All who encompassed every aspect of creation.
Queen Hatshepsut (1479-1458 BCE) proclaimed that Amun Ra was her father and thereby legitimized her reign. Alexander the Great would do the same in 331 BCE at the Siwa Oasis, proclaiming himself a son of the god Zeus-Ammon, the Greek version of the god. In Greece, Zeus-Ammon was depicted as the full-bearded Zeus with the ram's horns of Amun Ra and associated with power and magical force.
The God Amun Ra is a powerful source of magical energy and power that is scarcely touched today. He radiates a number of strong magical currents through the sun that are designed to give life and healing to the body.  The Talisman of Amun Ra empowers the aura, soul, and the human body with magical solar power derived directly from the Eye of Amun Ra.  The carnelian stone placed in the center of the talisman is empowered with the ability to connect with the God Amun Ra.
The aspirant may reflect sunlight off the stone and absorb the energy of
Amun Ra through the eyes.  The hour after sunrise and the hour before sunset is the best time to absorb this light and the currents they hold.  The God Thoth designed the original talisman of Amun Ra and this is an exact reproduction of this ancient magical tool, brought to the 21st century in its entirety for the first time.
The more you use this tool, the larger and more powerful your aura will become, your magical body will grow in size and power, and your ability to connect with the solar deities will increase.  There is no limit to the amount of solar magical force you can draw from the God Amun Ra.
This talisman is effective when used alone but its power is increased when used with The Divine Solar Magic Tablet,  Ars Immortalis, The Solar Gods, and Solaris.
The Solar Talisman of Amun Ra is our most powerful solar talisman and comes with a pdf of instructions and the chain as depicted.  Do not get the talisman wet, do not sleep with it next to your skin, and do not wash it.
This is a very large and very heavy item. The pictures just don’t do it justice.
Price: $1250

The Sword of Amun Ra