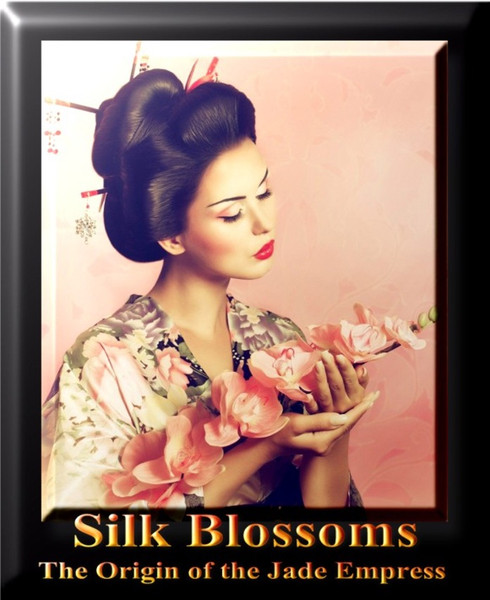 Silk Blossoms
The Origin of the Jade Empress E-Book
Her Majesty The Jade Empress is the wife of the most powerful god in the Chinese pantheon. She is an extraordinarily powerful goddess in her own right and she is the mother to the children of His Majesty, The Jade Emperor. She is a True Immortal and she oversees the daily activities of hundreds of palaces, castles, celestial government buildings, and the celestial treasuries. Her life, however, has not always been so blessed.
The Jade Empress began life as a poor girl thousands of years ago in a distant land on a beautiful planet in the Brown Seyfert Galaxy. Her family supported themselves as farmers and they lived peacefully in their village.  Her Majesty was a beautiful child but she was too thin and petite to work in the fields.  Her siblings bullied her mercilessly and she had to learn how to defend herself at a young age. Her parents were often away from home selling their crops and wares at the market, leaving her to fend for herself against the tyranny of her older siblings.
Tyre, Her Majesty’s human name, did not yet know that she was destined to become a powerful immortal and wife to a god. On this day, she was to make a life-changing discovery about herself and the world around her.  On this day, she was going to learn how to fight back in such a way that they would never shove and push her again.
Sometimes, choosing your divinity is the only path to survival. A powerful celestial entity gave the young human Jade Empress three spells that she kept under her pillow. The spells were designed to help complete her transformation into a full True Immortal Celestial Entity. The release of power from the spells is keyed to the following glyphs. Look at the glyphs at sunset on any Friday. The sky must be clear. Look at the glyphs in order and repeat the words of the song indicated below the glyph.
This is the same gift that the human Jade Empress was given by His Majesty in order to complete her transformation. When she reached the age of 75 human years, she faced west, bowed, sang the song, and walked onto the staircase into her castle with the towering spires.
You may use these spells as often as you like. Her Majesty The Jade Empress has further empowered these spells to greatly expand your celestial powers. They have no limits.
Price: $299.95