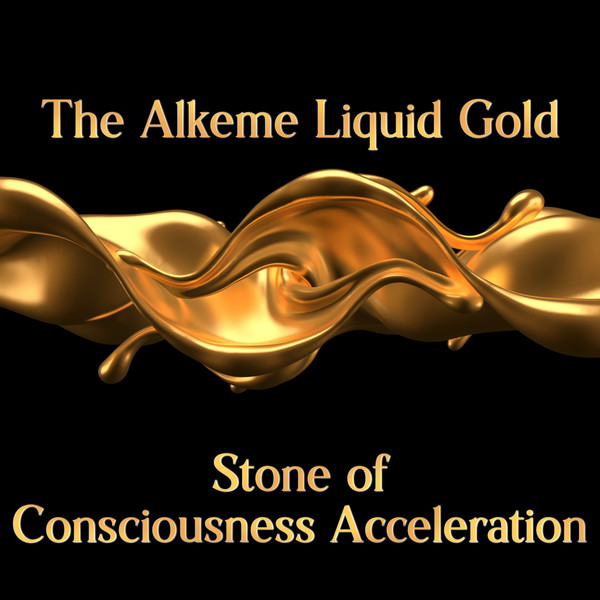 The Alkeme Liquid Gold Stone of Consciousness Acceleration
Alchemy is an ancient tradition that stretches back millennia in Europe, Africa and Asia – a mysterious and often misunderstood blend of science, philosophy and spirituality, and a forerunner of modern chemistry.
From antiquity, people could carry out apparently magical transformations, for instance by using heat to turn sand into glass. You can see how witnessing this kind of phenomenon might inspire the quest to change one element to another (even though it wasn’t until 1932 that an atom smasher successfully carried out the first true transmutation).
The word alchemy comes from the Arabic al-kīmiyā', ‘the art of transmuting metals’, reflecting how alchemists sought ways to change what they called ‘base metals’ such as lead, into ‘noble metals’, notably gold. The God Thoth, a form of The Dragon Alkeme, gifted mankind with the process of turning base metals into gold.
What is the Philosopher's Stone?
The primary goal of alchemy was the transformation of physical substances from a state of imperfect temporal existence into one of spiritual perfection.
The Philosopher’s Stone was supposedly able to achieve this – indeed it was so transformative that it was also an elixir of life – handy for rejuvenation and achieving immortality. It’s no wonder then that for centuries, the Philosopher’s Stone obsessed so many alchemists.
One of the most beautiful of all alchemical manuscripts – the Splendor Solis (‘Splendour of the Sun’) – was (wrongly) attributed to the legendary figure Salomon Trismosin, who claimed to have defeated old age with the Stone. Within the Splendor Solis, we can see a man emerging from a swamp transforming from black to white to red, representing the transition from putrefaction to purification to perfection.
I worked on my own version of the stone for many years. I achieved the white version and a tiny bit of the most advanced version, the red.  I tested several versions and found that most decayed over time. This even happened with the commercial varieties that I secured. I then decided to test my own energy with the white version. I tested one batch for over six years. I protected from EMF radiation, the negative effects of the sun, wireless energy, heat, cold, bacteria, viruses, mold, and fungi. I kept it in a closed container just like all the others. This one batch however showed remarkable properties after the testing. It remained unchanged without any sign of spoilage, degradation, or decay. It actually displayed no sign of aging of any kind after six years of testing. It was pristine.
I placed a drop on my skin and I felt a mild rush of energy that went straight to my head. That energy was accompanied by a tingling sensation that meshed with my kundalini in a very interesting way. My consciousness moved in ways that I had not felt in years. There were no psychoactive chemicals, alcohol, entheogens or other substances in the solution that could account for the acceleration. I immediately removed this batch from the testing area and placed it in a very secure area.
I have decided to share a bit of this batch with you. It is not meant for internal use and is for external use only. You may place one drop on your outer palm, sit quietly, and wait. Allow your consciousness to work with the energy. It is best to use one of our attunements or The Miracle Prayer with the liquid gold for the best effect.
We offer two forms of the liquid gold accelerant.
A.     Alkeme Liquid Gold Accelerant Tincture (DILUTED)- Contains ten drops of the precious accelerant mixed with healing oils, peppermint, and sweet almond- $500 per two-ounce bottle
B.      Pure Alkeme Liquid Gold Accelerant- (Non-Diluted) Contains two full ounces of my original formula, drawn straight from the original decanter that was used to create this magical liquid. We will only offer an extremely limited number of these bottles and the offer may be withdrawn at any time without notice when supplies run low. Ten drops of this solution mixed with two ounces of your favorite oil create a great diluent of the gold.  $10,000 per two-ounce bottle
The bottles should be stored covered in aluminum foil in a cool, dry area. This liquid works by connecting with your chi systems in the skin and is for external use only. No internal use or ingestion of any kind.
You may place one drop on your outer palm, sit quietly, and wait. Allow your consciousness to work with the energy. It is best to use one of our attunements or The Miracle Prayer with the liquid gold for the best effect.
We have an extremely limited quantity of this product.
Effects- consciousness enhancement, consciousness acceleration, acceleration of enlightenment and higher mind connections, increased chi acceleration, dream enhancement, and improved mediations
We cannot guarantee that these effects will happen for all users. Some people may experience benefits immediately. Some may require time for the energy to build. Some may have difficulty experiencing any benefit at all due to spiritual, mental, physical, emotional, and chemical blocks. A rested body, an open mind, and a healthy energy system allow for the best results.

This accelerant may be used as an alternative to the alchemical gold referred to in Acceleratus.