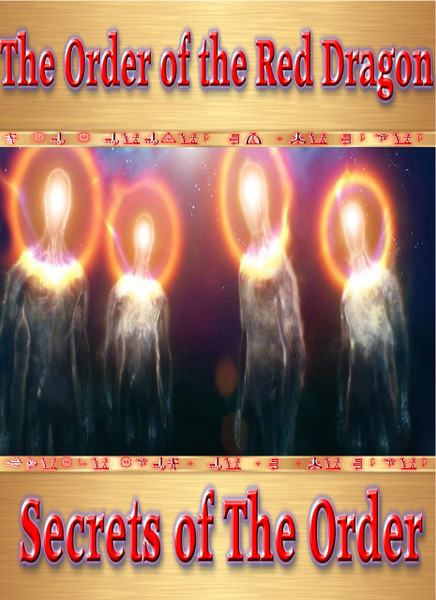 The Order of the Red Dragon
Secrets of the Order
The Order of the Red Dragon is one of the most powerful spiritual organizations in the universe. It was created to help humanity emerge from the depths of spiritual slavery into full enlightenment.  As the Order grew, hundreds of humans learned of its existence and eventually gained entrance into its hallowed halls.  Entrance is not easy and those who make the cut, are immortalized for their efforts.  Unknown to most, there are back doors that allow ordinary mortals to interface with the Immortals, Gods, and Dragons within the Order.
The Secrets of the Order is a one of a kind book. This work allows mortals to glimpse into the secret world of the Order.  The Order is organized into Inner, Outer, and Secret Chambers.  However, each of these castings is further divided into Lodges.  These Lodges are led by Beings of Great Power who are always on the lookout for humans with potential.  Each lodge has its own handshake, sigil, meeting house, and sign of recognition. A human knowing these is never truly alone and may contact the Order in meditation, visions, and in times of dire need, physically. In this work, you will learn how to determine when the Lodges are meeting, what their agenda is, and how to gain permission to participate.
Each potential entrant is screened thoroughly and those with negative or duplicitous intent are barred from even coming close to the chamber doors. Attending a Lodge meeting is an achievement in and of itself. Humans that are allowed entrance are fast tracked toward Order admission.
The Order also has special contacts in the astral world, the dream world, and the physical world that may be utilized with special meditations and glyphs.  There are also hidden words of power, solar techniques, and incantations known only to members of the Order.  When you possess this book, you will be given a special word that will allow you to communicate with a member of the Inner Order.
Secrets of the Order is a very special book and we encourage all of you to get this if you can.  We appreciate your support and this book is sanctioned by the Order.
Price: $2,000.00

The Regulus Book of Power