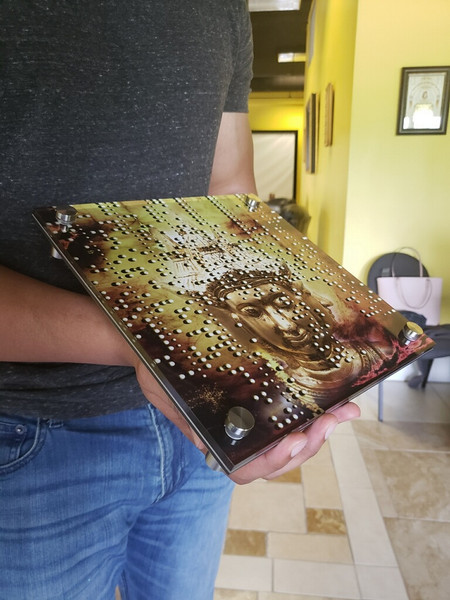 The Emerald Tablet Psionic Devices
The Emerald Tablets are among the most enigmatic and mysterious devices from all antiquity.  They were created by the God Thoth and they were a very important aspect of Atlantean life and technology.
The God Thoth was a very important deity among their people.  This field of psionics was essentially discovered by the scientists on Atlantis, with the help of Thoth.  With this science, the power of the mind to change reality, work on the body, adjust irregularities in relationships, wealth, and the fabric of consciousness itself could be harnessed.  The Emerald Tablet was the first true psionic machine, but it has been lost to antiquity.
To date, we have only had access to the pictures and artistic representations of the devices that were at the heart of this technology.  We have discovered a way to bring the psionic emerald tablet device into our world.  The device may be simply used as a power source for spiritual energy, astral force, and energy that can restore life force.  It is used with special incantations that come with the device.  The device connects itself to the various levels of consciousness of the user.  This connection works to use the untapped power of the deep hidden mind to perform work.  This area of the mind, known as the dormant higher mind, has much untapped potential.
Unlike the paper circuit tablets, this device works at a much deeper level to help you o work in multiple dimensions of reality at once and may be used to repair ailments in your ancestors in the astral world, higher dimensional aspects of self, and past life ailments.
You may use this device to amplify the power of your medallions, rings, amulets, and talismans.  It will also amplify and cleanse the energy of your aura with correct use.
The first device that we will release here comes with full instructions and a pendulum that you may use to extend your ability to use the device.  These one of a kind tools will be released in limited quantity. It is a powerful general psionic tablet with all of the functions described here.
The devices are made of steel, glass, and acrylic and are large and sturdy.  As you can see from the pictures, they contain a great deal of energy and power. They will be delivered fully assembled with full instructions.
Price: $1000