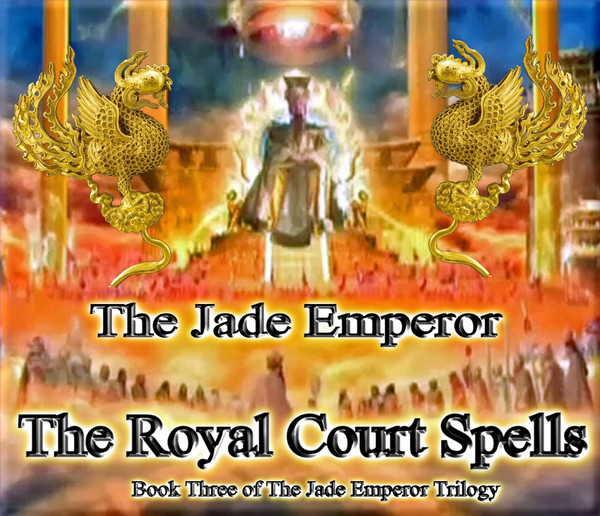 The Jade Emperor is one of the most powerful beings in the universe. He is the director and chairman of the Celestial Treasury and it is said that all forms of wealth pass through his hands.  He is very benevolent and kind.

He governs the cosmos and resides in a magnificent palace in the highest part of heaven along with his large family and entourage of ministers and officials. These beings form his royal court. The Jade Emperor is believed to have been the disciple of the Primordial Heaven-honoured One, Yuanshi Tianzun (Yuan-shi T‘ien-tsun) from whom he inherited the governance of the universe.

In his palace in heaven, the Jade Emperor lives with his wife the Jade Empress, Tianshang Shengmu or Mazu (Yu-huang sheng-mu or Ma-tsu) and their large family. Prominent members include his nephew Yang Shen (Yang Tsien), otherwise known as the Second Lord of Quality, Erlang Shen (Er-lang Tsien) whose Celestial Dog - Tiangou (T‘ien K’ou) - chases away evil spirits. One of the Jade Emperor’s secondary wives is the Horse Head goddess, who is believed to care for silkworms, producers of the precious Chinese commodity, silk. One of the god’s daughters is Miss Seventh or Shi Quning (Ts‘i-ku-niang), who is appealed to by young women in order to reveal the identity of their future husbands.

The heavenly palace is managed by Wang the Transcendent Official, otherwise know as Lingquan (Ling-Kuan), who also protects mortals from evil spirits. One of his functions is keeper of the palace gates where he stands guard wearing armour and wielding his heavy staff to ward off unwelcome visitors. He also runs errands for the Jade Emperor such as punishing wrongdoers and righting wrongs. The palace also has an extensive staff of attendants, ministers, officials and lesser gods

Like the signs of the Zodiac, every human s intimately connected to a member of The Jade Emperor’s Royal Court.  Each soul is assigned to a royal court deity at the time of the creation of the soul. This royal court deity ultimately guides the soul to the wealth and power that it deserves.  The Western and Eastern Sky based constellations were created to hide our connections to these Royal Deities.

The Royal Court Spells are granted by His Majesty and are the genesis of true growth and prosperity that flows into our lives. They channel his power into the world in secret and only those who discover these spells know the worth and magnitude of their power. The Deities in His Majesty’s Court work to extend His Power into the lives of commoners and royalty alike.

As an Avatar of His Majesty on Earth, I have been granted the authority to ordain priests in his name, issue new magical spells, and empower humans to work with humans to work with him more closely.  Tybro is the only company in the world that has performed Jade Emperor Master Classes and webinars. We are the only company in the world that issues magical tablets in his name.

We are honored to do this work.