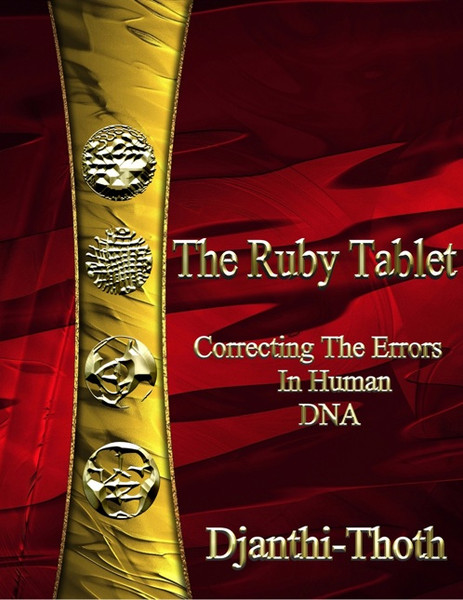 The Original Emerald Tablets were designed to create a community of illuminated and enlightened humans that could lead mankind into the stars and beyond.  In their original design, man only needed to look at the tablets in order to activate the hidden elements within consciousness that could lead to elevation.  These tablets were destroyed and only one tablet remained. In fact, man was only allowed one page of that book of tablets.  That page was in truth an introduction to the tablet itself.  As a result, mankind has been denied access to the True Emerald Tablets for thousands of years.  Most have been led to believe that the introductory tablet is all there is.  In truth, there is much, much more.
The Ruby Tablet is a new artifact that has never been seen on this world.  It is one of 150 different tablets that are designed to address the many maladies that plague mankind and the lower races.  The Ruby Tablet is designed to repair the many errors that occur in the molecule that we call DNA.  Even though it codes for all the information that makes up an organism, DNA is built using only four building blocks, the nucleotides adenine, guanine, thymine, and cytosine. Every human being shares 99% of their DNA with every other human.
If you put all the DNA molecules in your body end to end, the DNA would reach from the Earth to the Sun and back over 600 times (100 trillion times six feet divided by 92 million miles). If you could type 60 words per minute, eight hours a day, it would take approximately 50 years to type the human genome.
DNA is a fragile molecule. About a thousand times a day, something happens to it to cause errors. This could include errors during transcription, damage from ultraviolet light, or any of a host of other activities. There are many repair mechanisms, but some damage isn't repaired. This means you carry mutations! Some of the mutations cause no harm, a few are helpful, while others can cause diseases, such as arthritis, cancer, heart disease, and diabetes.
These mutations happen to everyone.  We all suffer from the ravages of these changes. Hair thins, bones become brittle, the metabolism changes, growths appear, prostates swell, blood pressure and heart disease arise, and a host of other all to familiar problems plague us as we age.  All of these problems are caused by errors in the DNA molecule.
The Ruby Tablet was created by Djanthi-Thoth to help the human race overcome the errors that cause illness, suffering, and premature death.  The human body was designed to last much longer than it does.  The elements within The Ruby Tablet work with the spiritual and energetic elements of the DNA molecule in order to repair and elevate the information within the DNA.  After these changes are made, the DNA begins to work better, repair itself better, and becomes more resistant to the ravages of the negative forces that seek to destroy this fragile molecule.
Some of The Ruby Tablets are designed to turn on specific gene sequences that will improve the function of the body.  The body will feel better, run more efficiently, and repair itself better. Each tablet group is keyed to a specific organ or grouping of tissues.  These keys help the organs repair themselves and address the thousands of errors that attack the sensitive DNA sequences each day.
All you have to do is look at the pages of the Ruby Tablet.  Each set of tablets will automatically work on the energy of the DNA of specific organs and tissues in order to repair the damage caused by living on earth.  Over time, you will notice the difference in how you feel, inside and out.