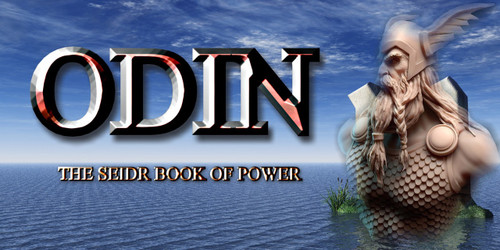 Seidr (pronounced “SAY-der;” Old Norse seidr, “cord, string”) is a form of pre-Christian Norse magic and shamanism concerned with discerning and altering the course of destiny by re-weaving part of destiny’s web.  The practitioner was guided in how to enter a magical trance (which may be accomplished through numerous means) and travels in spirit throughout the Nine Worlds accomplishing his or her intended task. This generally takes the form of a prophecy, a blessing, or other ways to change reality.

There were Seidr rituals for divination and clairvoyance; for seeking out the hidden, both in the secrets of the mind and in physical locations; for healing the sick; for bringing good luck; for controlling the weather; for calling game animals and fish. We will not teach curses in this text.

The Gods Odin and Freyr are the foremost practitioners of Seidr magic. Lord Odin is another form/incarnation of the God Djanthi’/Thoth, only in Norse form. The Goddess Maat is an Incarnation of The Goddess Freyr.

Destiny may be altered by gods, humans, and other beings, its initial framework is established by Lord Odin. The Odin Seidr Book of Power is not an essay text or a book of theory.  It is the first book of Seidr magic written by and Incarnation of Odin himself. We will only offer 24 of these texts.  This means that only 24 humans will ever own this book. We will never offer it in any way, shape or form in the future. This is a solemn promise. When these 24 books of power are gone, they will not be reprinted. This is an edict from heaven.