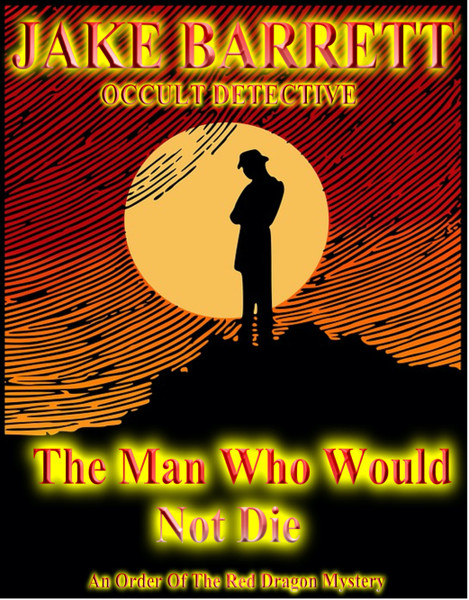 Jake Barrett, Occult Detective- The Man Who Would Not Die-
An Order of The Red Dragon Mystery
Andres grabbed my hand and in a bright flash of light, we disappeared from the spot and reappeared in a small café. Seconds later, a cadre of air raid sirens went off. The war was over and I wondered what could cause them to sound off that way. I also wondered how he teleported both of us with such ease. It takes a lot of power to do that. I needed answers.
You must have questions Mr. Barrett.
I do as a matter of fact. How did you teleport us here? What were you running from? You seemed to know what was coming before the sirens went off.
Andres smiled and looked over at the counter. He motioned for the waiter.
Do you believe in dragons Mr. Barrett?
You mean those large reptiles with huge wings that breathe fire?
Yes, the very same.
I am a very open minded man, but I draw the line at monsters from fairy tales. Why do you ask? It seems like a very incongruous question.
Take a look outside the last window on the right Mr. Barrett.
The air raid sirens had become deafening. I had no idea why he wanted me to look outside, but I played along.  I walked away from the table and pulled the dusty thick red curtains to one side. High overhead in the northeastern sky, I saw a dragon.  It circled the area slowly as if it were looking for something. I could not believe my eyes. I watched the behemoth for a few moments before it turned south and flew off toward the ocean.
Andres knew a lot more than he was telling me.
She is looking for me Mr. Barrett.
You know that thing? It must be 100 feet long with a 200 foot wingspan. How do you know a dragon?
She is my wife, and the mother of my children.
Andres looked directly at me as he spoke. He did not blink and he showed no sign of being anything other than completely serious. He nonchalantly picked up his cup of Turkish coffee and took a long sip while he patiently waited for my reaction.
Jake Barrett is a man of many mysteries. He is an accomplished magician, trained by The Order of The Red Dragon, a former black ops specialist, and a private detective. He travels the world as an agent of the Order and he handles cases that no one else will touch.  The Jake Barrett stories are teaching texts that include actual spells that occult specialists use in the field during the course of their work. Theirs is a dangerous and exciting life that includes contact with magical species that most of us only dream about.  In our first case, Jake meets a mysterious and wealthy man who offers him the biggest payday of his life, if he can manage to live through the night.
Dr. Mitchell E. Gibson
Price: $99.95

The Body of Wealth Empowerment Robe