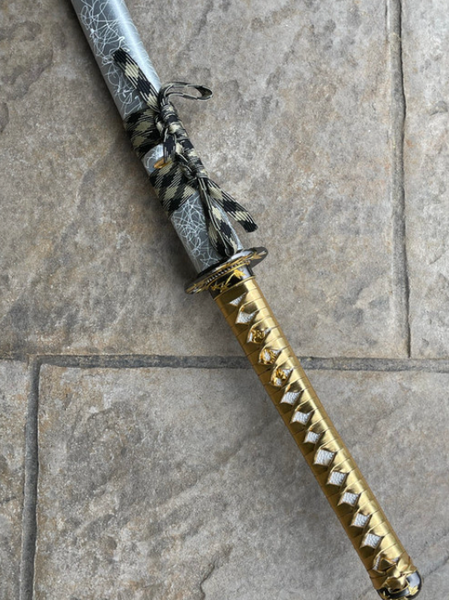 In the beginning of time, the earth was a very difficult place to live; a much harsher place to live in than it is now. People were having tremendous difficulty coping with existence; not only did they have to deal with harsh conditions, but also with all kinds of monstrous beings. At this time, there were also not many gods or deities to protect them.

Furthermore, a lot of powerful, evil demons were defying the immortals of heaven. The Jade Emperor was still at the time an ordinary immortal who roamed earth to help as many people as he could.

He was, however, saddened by the fact that his powers were limited and could only ease the sufferings of humans. He decided to retreat in a mountain cave and cultivate his Tao. He passed 3,200 trials, each trial lasting about 3 million years.

During his trials he drew upon the symbols of power and light as well as his mighty sword, Tathagatha. This sword absorbed all of the powers of his symbols and took the power that he was awarded from all his victories. It is often seen by his side and is considered to be one of the greatest spiritual weapons for combatting negative forces and drawing in the magical currents controlled by His Magesty.  Tathagatha is a meditation tool that will allow you to tap into these currents and magical forces symbols simply by holding it. It is one of our most beautiful swords. The Master has embued this sword with a portion of the energy of Tathagatha and the sword will come with a list of katas.

This sword comes with a display stand and a FREE Master charge.

We only have one sword remaining

The Amaterasu Sword of Power

The Goddess Fortuna Sword of Power

The Amaterasu Sword of Power