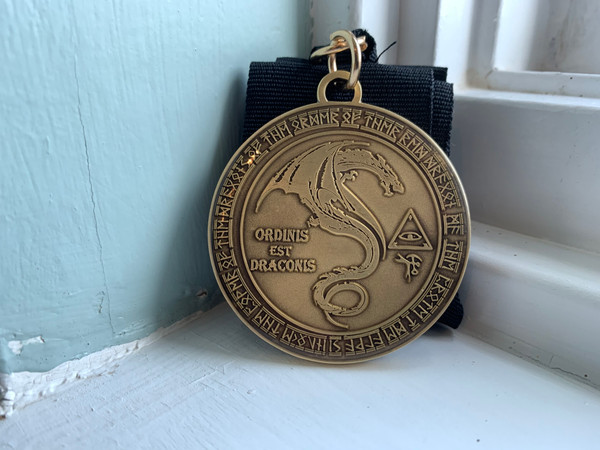 The Order of the Red Dragon is one of the most powerful spiritual organizations in the universe.  It began over 70 billion years ago in the first multiverse that emerged from the mouth of the Demiurge. It is controlled by a group of Dragon Masters that sprang into being spontaneously from the creative forces of the universe.  Each Dragon Master has the power to take any shape that they choose, including that of the human form.  They live, work, breed, and coexist with humans as a ruling body. These products will each invoke the power of one of these Masters.

The Order has up a system through which humans could learn the truth of their reality.  They set up an outer channel that would give secrets relative to the most superficial realities of the Order.  The outer channels may be discovered by any human who dared to look beyond the surface events of the world.  The outer channels only hint at the power and magic of the deeper reality of the world.  From time to time, the outer channels allow humans to witness real magic through miracles and high technology. The Tybro Followers have proven themselves through their spiritual maturity, miracles, and constant devotion to spiritual growth. You have been appointed as the newest Outer Channel of The Order. This honor allows you to have access to certain aspects of the consciousness and power of the immortal masters and their divine forms.

The Ordinis Draconis Medallion is embued with power from Master 12 and The Great Dragon Czon.  Master 12 has been a Buddhist monk for over 1200 years.  His presence is known to many of the monastic orders.  He never ages, never eats, and never sleeps.  He travels all over southeast Asia teaching, performing miracles and feeding the poor. He has not adopted a formal mission on earth.  He was born fully enlightened and grew to adulthood in two years.  His family knew that he was special and he was adopted into the True Order at the age of 12. He has full control over his divine powers and he is a full immortal.  He is considered to be a full incarnation of The Gautama Buddha. The medallion will connect you to his consciousness and power.

Czon is the divine immortal form of Master 12. The Master is fully aware of the presence and location of his divine immortal form at all times.  He trades consciousness and form with Czon at will.  Czon travels the interplanetary pathways in search of food, energy, and objects of power.  Czon has no formal position within the Order, but he uses his connection to Master 12 to gain admission to the most important gatherings.  Spell Czon’s name three times and stomp your right foot once. He will appear to you in spirit to guide and protect you.

The medallion will amplify and focus these powers on your behalf. Wear it proudly, wear it in power, wear it in truth.