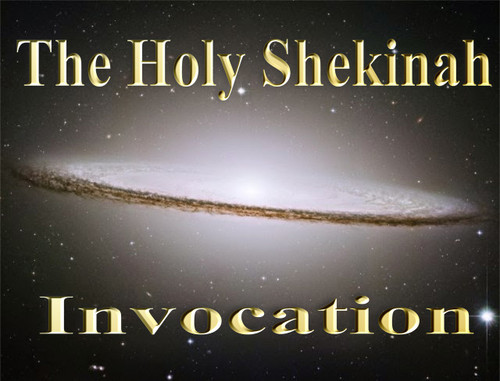 The Invocation of The Holy Shekinah

Although God is omnipresent, He has chosen to manifest His presence in certain locations and at certain times within history. This physical manifestation of God has come to be called the Shekinah.

The Holy Shekinah is the visible manifestation of the presence of God. It is the majestic presence or manifestation of God in which He descends to dwell among men. Whenever the invisible God becomes visible, and whenever the omnipresence of God is localized, this is the Holy Shekinah .  In the Old Testament, most of the visible manifestations took the form of light, fire, or cloud, or a combination of these. A new form appears in the New Testament: the Incarnate Word [John 1:14].

The concept of the Shekinah is behind the wonder of the incarnation.

This recording will bring the power of The Holy Shekinah into your life.  There will be a tangible incarnation of The Creator that will spread extra light and glory to you.  The invocation is spoken in a rare angelic tongue and is the first of its kind to enter into this world.

I CALL THE GREAT SHEKINAH IN POWER AND GLORY

PROTECT ME IN GLORY

MOVE ME IN YOUR LIGHT

For more information on The Holy Shekinah Invocation, visit: http://tybro.com/the-holy-shekinah-invocation/